Our thoughts, views and everything else. 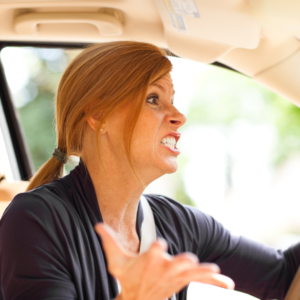 A car cuts you off in traffic.

You’re midway through using a new-to-you lesson when a student rolls their eyes and whispers something to a classmate beside them.

A usually engaged and upbeat colleague sits silent and stone-faced in a staff meeting as you present a new idea.

In these moments, it can be hard to keep your interpretations of someone’s actions from churning up negative emotions, but you have a choice. You can choose to let the runaway train of negative feelings leave the station and derail your day, or you can take a purposeful pause and ask yourself what is going on beyond the story you are telling yourself.

The Story I’m Telling Myself 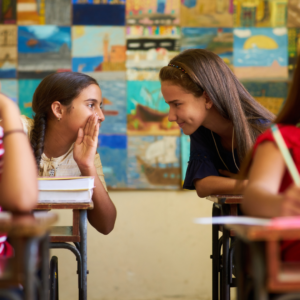 The first step is to check in and ask “what is the story I’m telling myself?”* This begins with you asking yourself what it is you think you saw and what story you have made up based on your interpretation of the situation. It might look something like this:

During my lesson, Susie rolled her eyes and whispered to Jen. The story I am telling myself is that my lesson was bad or boring, and Susie clearly hates my class and was disrespecting me by whispering and rolling her eyes. I knew I shouldn’t have tried a new strategy and all my students are probably talking about what a terrible teacher I am. Why do I even bother trying new things when I know they’ll probably just bomb.

Then, ask yourself these questions:

What’s going on with me?

During my lecture, Susie rolled her eyes and whispered to Jen. I was using a new-to-me strategy during this class, so I was on high alert for student reactions. I was already feeling vulnerable and insecure because I was trying something new and a behavior I would normally have ignored or been unbothered by, made me feel like it wasn’t going well. Rather than deciding it went poorly based on one eye-roll, I can check in with all my students about how they feel it went.

By reframing your thoughts and examining your feelings, you can better choose your response to the situation.

What is going on with that person right now? 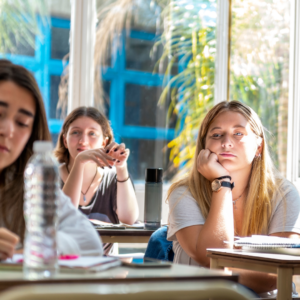 It is easy to tell ourselves a story about the motives behind someone else’s behavior, but just like with asking “what’s going on with me?,” being willing to get curious and ask “what’s going on with them?” before rushing to judgement, can be an amazing way to take that purposeful pause before reacting. When we get “curious, not furious,” we can often diffuse our feelings of anger in situations that would normally make us upset.

By reframing the situation and trying to imagine other reasons for people’s behavior, we allow ourselves to practice empathy as well as giving ourselves a moment to be mindful in our reactions. Now, the story you tell yourself might look like this:

During my lecture, Susie rolled her eyes and whispered to Jen. I wonder what is going on with her. Maybe something is going on in their social circle that is upsetting Susie right now. I know Susie and Jen are on ASB and there have been some interpersonal issues going on there, so maybe they were discussing that and it has nothing to do with my lecture. I should check in with her after class.

In reframing the story in this way, we allow ourselves to imagine circumstances unrelated to us that may have caused the person to behave in the way they did. It allows time to practice purposeful pauses instead of just reacting.

These two questions allow you to pause and not only check in with what you are thinking and feeling in this moment, but they also allow you to put yourself in someone else’s shoes and practice empathy.

*Credit to the amazing Brene Brown for the phrase “the story I’m telling myself.”

This website uses cookies to improve your experience while you navigate through the website. Out of these, the cookies that are categorized as necessary are stored on your browser as they are essential for the working of basic functionalities of the website. We also use third-party cookies that help us analyze and understand how you use this website. These cookies will be stored in your browser only with your consent. You also have the option to opt-out of these cookies. But opting out of some of these cookies may affect your browsing experience.
Necessary Always Enabled
Necessary cookies are absolutely essential for the website to function properly. This category only includes cookies that ensures basic functionalities and security features of the website. These cookies do not store any personal information.
Non-necessary
Any cookies that may not be particularly necessary for the website to function and is used specifically to collect user personal data via analytics, ads, other embedded contents are termed as non-necessary cookies. It is mandatory to procure user consent prior to running these cookies on your website.
SAVE & ACCEPT